A Note From One Memphian to the Rest of the World 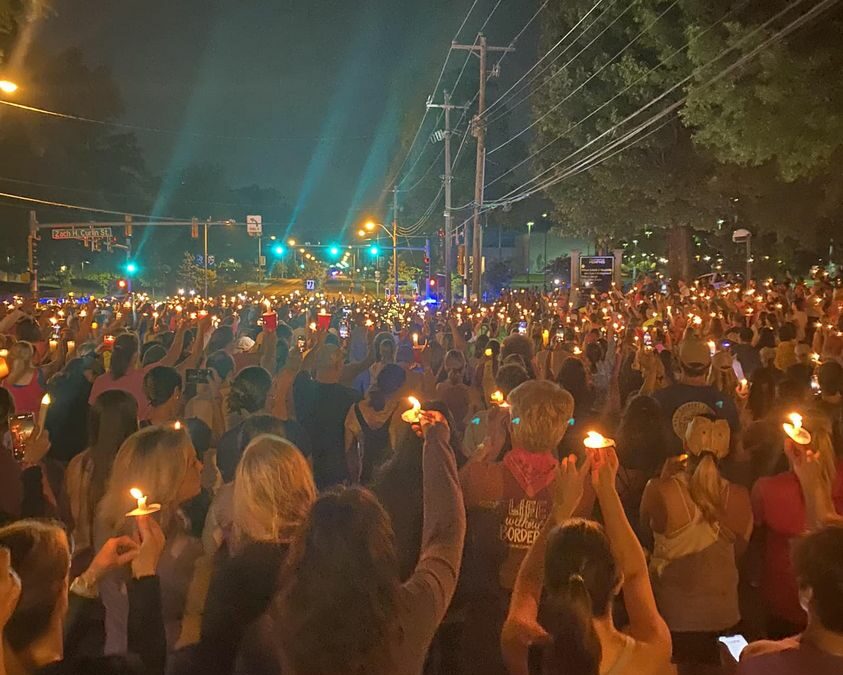 We’ve all seen the headlines surrounding Memphis these past few weeks; “Memphis Mom Abducted and Murdered While Jogging Near U of M.”

“Five-year-old in Critical Condition After Being Shot at a Memphis McDonalds.”

“Woman and her Two Children Abducted in the Parking Lot of a Memphis Target While Putting Groceries in her Car.” ”

But, ultimately, for those who live in Memphis and drive past the Lorraine Motel–the spot in which Dr. Martin Luther King was assassinated simply for fighting for equality–Memphians have a daily reminder that true evil and injustice exist, and always has. While there are moving and beautiful tributes all over our city for those we have recently lost, they are an indication that this evil will perpetually continue.

One of the most extensive tributes our city has shown came on the morning of September 9th at 4a.m. when members of various Memphis communities gathered to finish Eliza Fletcher’s run, the run in which she was brutally snatched in the middle of. This moving fortress engaged the route in which Eliza would have taken, completing her run. Along this path were “Liza’s Lights,” brilliantly illuminating the way for those who were running, as well as the hundreds of spectators. Memphis Police Department, while not directly associated with this endeavor, heroically blocked streets and provided surveillance for this tribute. And we applaud them for that.

It’s not just Memphis who is mourning our city’s devastation; there has been an outpouring of love and support funneling through the veins of Memphis this week from all over the world. The furthest I’ve seen is Quebec, and as a Memphian I am moved that our suffering is being acknowledged so thoroughly.

But if there’s one thing we could tell the world, it would be that there is more to Memphis than the violence behind the headlines you have recently seen. And I’d like to tell you a little about our AMAZING city.

We are a music-infused city. Fun fact; Memphis has been mentioned in a record-breaking 1,057 recorded songs throughout music history. And there’s a reason for that. Dubbed the Home of Blues, Soul, and Rock N’ Roll, Memphis has paved the way for hundreds of nationally acclaimed artists. Sun Studio is where Elvis Presley recorded his first album, and artists such as Johnny Cash, Carl Perkins, Roy Orbison, and Jerry Lee Lewis soon followed. You can tour Sun Studio to see where the virtual foundation of Rock n’ Roll as we know it manifested, and I highly recommend it. Also, Memphis boasts the Rock n’ Soul Museum, which offers a complete Memphis music story as well as its global influence.

We LOVE our barbecue. If you ask some Memphians, there’s nothing like Memphis barbecue. We even dedicate the entire month of May to barbecue and give the opportunity for other regions to come to our city to try to out-barbecue us via a competition called the Memphis in May World Championship Barbecue Cooking Contest, which has been recognized by USA Today as the “Most Prestigious Barbecue Contest” in the world. Spanning three days, we kick off the celebration with a multi-day music festival we dub  Beale Street Music Fest, inviting some of the most prolific and influential artists to perform. Collectively, this is called Memphis in May and we see folks from all walks of life travel from all over the country for this two week celebratory event. Check it out, we’d love to have you as our guest!

Just like any self-respecting, Southern city, our college football team is extremely important to us. You will find Memphis Tigers paraphernalia scattered throughout our city, as well as lift-size replicas of tigers painted in an assortment of colors as ohmage in and around certain establishments in Memphis. Go Tigers!

But did you say PROFESSIONAL TEAMS? We have that, too…we love our Memphis Grizzlies, who find themselves in the playoffs pretty much every year. Their home arena is our very own FedEx Forum, which spans 805, 850 square feet, covering fourteen acres. It is capable of seating 18,119 people for any given basketball game including 1.000 premiere, courtside seats. There are also twenty seven courtside suites, thirty two club suites, four party suites, and eighty club boxes. FedEx Forum also hosts a variety of concert events and sits adjacent to Beale Street, making it a cinch to grab a bite to eat or a drink before or after any event.

Beale Street, you say? Our world-famous Beale Street is more than just a “drinking spot.” It boasts one-of-a-kind shops in which you can acquire Memphis related memorabilia, including–but not limited to–the musical history that put Memphis on the map. Beale Street runs from the Mississippi River to East Street, lapsing just shy of two miles. If you walk this two mile stretch, you will hear a variety of live music seeping from many of the bars and restaurants, from Blues to Rock, and everything in between. Oh, and if you like cheeseburgers, stop by Dyer’s in the heart of Beale Street to have a famous “fried” burger; I promise all other burgers will pale in comparison.

Like the Theatre? The Orpheum Theatre offers architecturally stunning views via its original fixtures and Artisan millwork. Hosting everything from spectacular, Broadway-inspired tours to comedic events, the Orpheum has hosted star-studded performances since 1926.

Memphis is the epicenter of the Civil Rights movement. Memphis didn’t necessarily attain this status willingly, but we accept it proudly. It was on April 4, 1968 that Dr. Martin Luther Kings was assassinated at the Lorraine Motel, thrusting Memphis to eventually become the home of the National Civil Rights Museum. Part of the museum includes Dr. King’s death spot, perfectly preserved as it was in 1968. Consisting of several historic buildings, the National Civil Rights Museum traces the history of the Civil Rights movement via various exhibits. In 2016, it was honored by becoming a Smithsonian Affiliate Museum. I would recommend adding the museum tour as a “must see” when visiting Memphis.

Memphis has an amazing zoo, in addition to a wonderful children’s museum (CMOM) as well as an amazing natural history museum that most Memphians will always refer to as the Pink Palace Museum, but has been updated to the Memphis Museum of Science and History. We also have a Fire Museum, which promotes the education of fire and life safety.

Memphis has all the views. It might be a surprise to those who don’t live in Memphis that we have some pretty spectacular views. Memphis has the moniker of “Bluff City,” a name given due to the amount of “cliffs” facing the Mississippi River. There are four bluffs stretching the length of the Mississippi River, and Memphis is located on the fourth bluff, with the other three within a sixty mile radius. When standing in Tom Lee Park overlooking the mighty Mississippi watching the barges pass under the Hernando-Desoto Bridge, I would challenge anyone to find a more ethereal or peaceful scene. The phrase “these hills sing” from the movie The Emperors New Groove come to mind. It’s simply a spectacular vantage.

There you have it! Just a little about our wonderful city. I hope this gives some insight beyond the tragedies that have plagued our city recently. I am proud to be a part of this wonderful city, and I have yet to experience a sense of community than I have living here. And while I can’t speak for all Memphians, I feel comfortable echoing our sincere gratitude to all who have prayed for us, sent well wishes, love, and hope. We hear you, and we feel your sincerity. And from the bottom of our barbecue-stained, music-loving hearts, we thank you.

Subscribe to our weekly newsletter below and never miss the latest newsworthy story, local happenings, or events.